Although interest in English literacy and citizenship are what draw participants to the Rockland Office for New Americans, we want to reward them for their perseverance and dedication. Therefore, each quarter we sponsor a special trip to a local historic site for students and their families (families/guests at students’ expense).

On October 29, 2016 we offered our first student trip to Fort Montgomery NY, the site of a fierce Revolutionary War battle. The students traveled by charter bus 15 miles to the site, some experiencing a charter bus for the first time, and were greeted by tour guides dressed in traditional Revolutionary War attire. The “Revolutionary War Heroes” escorted the group to an indoor exhibit filled with artifacts from the war. Although the guides were not bi-lingual, they communicated very well with the students and conveyed the significance of the era through gestures and the help of student translators. Following the indoor presentation, students participated in a guided walking tour of the restored battlefields, saw cannons and ammunition that were common-place during the Revolutionary War, and experienced first-hand the difficult terrain the soldiers had to endure during the “Battle of Fort Montgomery”.

Following the tour, participants walked along the scenic Bear Mountain trails adjoining Fort Montgomery, visited the Bear Mountain Zoo, and enjoyed a picnic-style lunch at Bear Mountain State Park.  It was a day filled with new experiences that was thoroughly enjoyed by all. 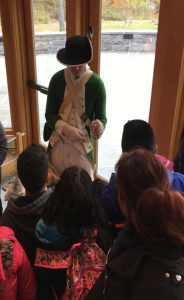 The highlight of the second quarter of 2017 was the ONA sponsored trip to the Statue of Liberty and Ellis Island on June 17. Students quickly signed up to attend, and many brought their children and/or spouse at their own expense. There was such great interest that we had to hire two busses to accommodate students, guests, and staff. The students talked about the trip for weeks prior to the event, and seemed to be in awe of visiting both historic sites in one day.  This trip was eagerly anticipated by all participants. We arrived at Liberty State Park in Jersey City, NJ, went through the security check point, and finally boarded the ferry for Ellis Island. Time spent at Ellis Island allowed participants to visit the various sites in the Museum, access the computer program that provides ancestral information, look at the hundreds photos of from generations past, and perhaps glean some information about family members who may have entered the USA through Ellis Island.

All went quite well until we were about to board the ferry for the brief ride to the Statue of Liberty. As we were waiting to board, the sky opened up, we were out in the open with no shelter, and totally unprepared for the unexpected torrential rain.  It is difficult to describe how extreme the weather became, but in spite of the situation, students continued to look forward to getting to Liberty Island.

When we arrived, the weather actually became worse, but the students were not deterred.  All were delighted to be on Liberty Island, and a great many persevered and walked through deluge from the dock to get up close and personal with the Statue of Liberty. The Statue of Liberty is such a powerful symbol to the students that nothing, even a torrential downpour, could dampen their enthusiasm. This is a trip that will certainly be repeated, but we hope the weather will cooperate the next time!